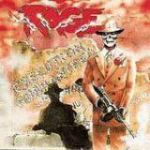 There's no chance to defend
When power's in wrong end

Me, I come out the dirt, I got nothing
No, the cops they were looking for a fight
And I'm a victim of denunciation

My fortune is a plight
Where's law there is no right

Now I'm a criminal subject
Why? My life's a mess, no turning back
Just because arbitrariness rules this land

There in the subway station, they shot him dead
He had broken secrecy - omerta
That's what they will all get. They've got a job to do
The business is too important to take a risk and so

Please don't get me wrong, if you ever say a word
You'll have missed my friend, this is what you'll get

We are an old family, controlling the trade
Gun running for the White House, the CIA
Works hand in hand with us. We must feed the flame
Of hate and war in the third world, cause if they kill themselves

We choose, you loose
You, yeah, I've got a mission for you
Look- here, a list of men to execute
Shoot- you must shoot them, noone will find out
Truth- truth is a daughter of time

Before the Storm (The Secret Affair)

Who's such a fool to destroy himself?
Who still believe he could rule the world?
But after all they invent the ultimate war machines
Declaring war on the world from space, a star war
Tell the world is for protection, nothing could go wrong
They wouldn't ever confess what their real intention is

Tell the world is for protection, nothing could go wrong
They wouldn't ever confess what their real intention is

A shadow
One whisper
Nothing to see

There is a pair of glowing eyes, a gruesome call

Without home
An abased one
In restless pain

Look in the mirror, a river of blood - your race is almost run

He's in your back even there on each side, in front of another one
He grabs you at your throat, his jaws will cut you into bits
It's just what he always did, the hunter made his hits

Howling and hunting, a raging revenge - substitutes can't satisfy
The loss of what's too precious to forget has blurred his eye
Soon the day will come when they will stand up like a storm
The pain will be too much to bear, their hearts they must be torn

No one knows the natural powers
They're astonished, they're afraid
Pushing forwards technology
They forgot just who they are
Once contented with fullfillment
Now they cannot get enough

They fight against their own achievements
They fear what they once created
Suffocate in poisoned breezes
Once they conquered, now they're slaves
They are running from thir own hell
They are running, 'cause they know

The time has passed them by, we must all pay
Just one step back could save for us the day
Why can't they see that they have failed

Oh, shit, I'm getting sick of this
I'm caught and can't escape
It's gonna blow my head, you fucker get away
Me, madman in a rage

Oh, baby, it's so unfair
The whole thing's such a mess
Would someone keep the door locked up
When the house is falling in?

The time is coming
I don't want no more
I should believe in
Oh man, what a bore

Maybe you think it's allright, well
But ain't it a pity to hang around with nothin' to do
But watching it? Maybe someone needs a big kick in his
Map!
So I can help!

Knights of virtue
Men of war
Ideals of our time

When You Are Dead

He's got a pleasure in his life that's a real chill
I think it's funny but the people say he's ill
He likes to keep what's transient, save it from decay
That's what you got to know if you should pass his way

He's not a killer, but death is his dearest friend
It is for everyone, beginning and the end
And on the graveyard, where there's rich and poor the same
He's digging in the ground to set them free again

It's a passion with him to free them from their flesh
All night he's in the cellar rigging up remains
And then he's got them all together one by one
A real collector of the dead, a lucky man